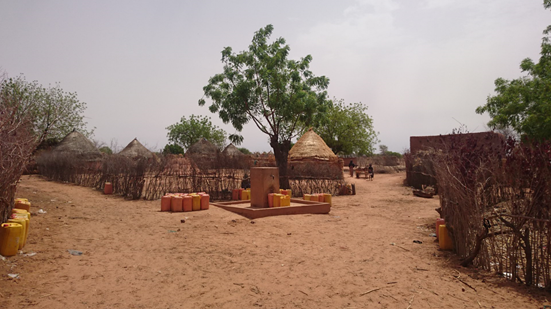 I went to Niger to continue with the research work for my master thesis. The objective was to collect the data needed to develop a decentralized renewable energy system for a village with no electricity for the basic needs. As part of adapted research methodology the electricity supply situation in the city of Niamey as well as surveys and village field trips were performed to have a good comparison among different realities of the spectrum.

I was received in Niger with smiles and friendly people and a slap to the face by the weather. Most of the days were filled with day to day activities, conversations, literature reviews, setting up and carrying out interviews, requesting for data and filing paperwork. But sprinkled throughout, memorable things happened, tidbits of conversations that stood out like insights of lifestyle differences, etc. A few days after my arrival I bought a hot plate (electric stove) to be able to cook meals in my room and bought some food stuff. I went to a local church, played basketball and got internet access.

To anyone who doesn’t know, April is the hottest and driest, month of the year in Niger. It is also the month when the solar radiation is most intensive. This I came to know threefold:  by people telling me “Survive April and you are good”, by what the climate data I was working with and first hand every time I stepped out. The rainy season, I was told, to start sooner this year (around mid-May) but instead it arrived late (around mid-June) testifying to the unpredictability of the weather.

As part of my work plan we visited multiple villages to select one that conformed to my research objectives. At the first village we were received with faces both happy and relieve to see us. Here, we found wooden logs stacked to form a quadrant, and through in the ingenuity of the people they affixed a rolling element to act as pulley system (Figure 1). The installation was used to draw water from the well. Three women worked pulling the rope in rhythm with each other so that the rope was in constant movement. There were also others who poured the extracted water into the containers and sorted them. We were told that the main issue they were facing was the lack of water, projects had been planned and they were waiting commencement to solve the issue.

Figure 1: A water well in a village in Niger (surroundings of Niamey) – in use for last 60 years

The next village, we were received with open arms and smiles. This village was located by the river Niger and so they didn’t have issues with water availability but rather their main concern was electricity.

After talking with the village chief, we decided to work with this village, Sekoukou. In which, with the help of the teachers of the village school, the surveys were carried out.

My final week in Niger was filled with preparations for my departure as well as preparing the final presentation to show the results of my stay.

I found Niger to be a beautiful country with huge possibilities for development and the availability of resources to do so. They only need to tap into them correctly. I could keep talking about it but then I probably would never finish. I left filled with positive feelings and high expectations of what this country can become; as well as a tan to envy.

Countries Where We Work!

Click on the image to discover important facts and data about Niger and Mali: